If it is true that Singapore’s greatest asset is its people, why is it that a large number of Singaporean women in their prime are absent from the workforce, especially compared to their male counterparts?

It so happens that the majority of Singaporean women in their prime are mothers as well.

According to the Ministry of Manpower’s Labour Force Survey 2018, most of the women in their 30s and 40s who were outside the labour force were not looking for a job because of family responsibilities, with childcare (56.5%) being the most common reason cited.

The lack of childcare options and flexible work arrangements, and the societal attitude of placing the primary parenting role on women have contributed to women dropping out of the workforce.

Another reason for this is something called the “motherhood bias“, a form of gender-based discrimination in which employers and colleagues view mothers, or pregnant women, as less competent and less committed to their jobs.

A 2018 report by McKinsey Global Institute (MGI) estimates that advancing gender equality could boost Singapore’s gross domestic product (GDP) by an additional US$20 billion, or 5%, by 2025.

Join us for a panel discussion on May 23rd, as we explore questions such as:

Register your seats at: https://inclusive-workplace-catalyseconsulting.eventbrite.sg

Harassment at work happens more often than it is addressed. Whether or not sexual by nature, it is as real as it is distressing.

#MeToo is a hashtag that went viral on social media in October 2017, as men and women all over the world chimed in to share personal stories of undergoing harassment, following sexual misconduct allegations against Harvey Weinstein. While the Weinstein debacle was largely focused on sexual harassment, #MeToo applies in many other contexts.

In this event, we explore what workplace harassment looks like in Asia, its many facets, and how cultural perspectives of this vastly diverse region might make addressing certain cases difficult. Lastly, we will be sharing practical tactics to navigate the situation when one is witnessing or faced with workplace harassment.

Do join us as we hear from subject experts in this delicate topic; including a human resource professional and law practitioners hailing from AWARE, Bird & Bird ATMD and Uber. Let’s learn what we can do to respond – in turn reinforcing a safe and conducive work environment for all. Please note that this discussion is off the record.

Managing Harassment in the Workplace

There is a new climate. Employees are speaking up and tolerance for harassment is down. In the face of changing attitudes, companies cannot afford to wait until there is a crisis to put the right policies and practices into place.

Learn from experts on the best practices for creating a safe work environment and managing workplace harassment.

This event will be hosted by Bloomberg, in partnership with AWARE and TSMP Law Corporation who are the sponsors of refreshments. Refreshments will be offered from 6pm.

Note: This session is ‘off-the-record’

Meena Anand is an experienced global HR professional with strong expertise in Organizational Development, Employee Relations and M&A. Currently she leads the Employee Relations and Conduct functions globally at Standard Chartered. In the past Meena has successfully held both senior generalist and specialist HR roles at Standard Chartered, Barclays and UBS.

Ian heads the Employment & Labour team at TSMP. His practice covers advisory, transactional and contentious employment work, with a focus on non-competition, dismissal, data privacy, harassment, M&A employee transfers and industrial relations issues. Ian is the lead author for the Singapore chapters of “The Employment Law Review” and “Getting the Deal Through – Labour & Employment”, as well as the Employment chapter of “Law Relating to Specific Contracts in Singapore”. Ian serves as Chairman of the Law Society Civil Practice Committee, and is a Referee of the State Courts Small Claims Tribunals and a Fellow of the Singapore Institute of Arbitrators.

Susanna Nickalls, our Director of Catalyse Consulting gives an insight to unconscious bias by sharing why we have biases and why it is important to be more aware of them and talk about them.

This shows that there is a need for us to be more aware so that we can overcome the automatic association we make that might hinder women to rejoin the workforce. 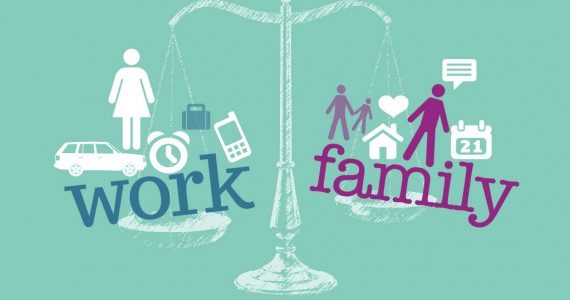 March is the month to celebrate and discuss women, as organisations centre their events around International Women’s Day. It is always heartening to see companies invested in balancing gender in their workforce and leadership.

Companies that are committed to maintaining and attracting female talent know there is a strong business case for doing so. A company is only as good as its people, and the female talent pool is too rich to miss out on. Furthermore, high turnover rates indicate a waste of investment in recruiting, training and mentoring women.

Many companies and countries have implemented policies to support women’s leadership.

Things that work well include setting targets on women in leadership roles, designing systematic plans to achieve these targets and commitment from senior management.

Nevertheless, progress remains slow. The World Economic Forum Gender Gap Report 2015 estimates that it will be 118 years before the global gender pay gap closes — putting us four generations away from parity. In 2014, the prediction was 81 years.

What still stands in the way of women’s potential to earn as much as and climb the career ladder like their male counterparts? A key issue, often overlooked, is care.

Even today, women are expected to be the primary caregivers for children. Many leave paid employment to fulfil this role because their workplaces do not make space for caregiving needs. For gender parity to become a reality, companies need to recognise that every worker has caregiving responsibilities, and that these responsibilities — quite rightly — affect men as much as women.

CATERING TO A WORKFORCE OF CAREGIVERS

Women face great cultural pressure to be primary caregivers, and often they are. However, this is changing. In a 2014 Harvard Business School (HBS) Study, one-third of 6,500 male millennial HBS graduates expected to split childcare responsibility 50:50 with their partners, compared with 22 per cent of Gen X men and 16 per cent of male baby boomers. Similar findings were reported by Stanford and Wharton School of the University of Pennsylvania.

With rising cost of living, most couples are in dual-worker relationships. In Singapore and Hong Kong, it is almost a necessity for both parents to work to ensure a good life for their family, leaving a gap when unpredictable moments of caregiving arise.

Hence, balancing the dual tug of care and career is no longer just a women’s issue. It is also a men’s issue and, ultimately, a work design issue. Our workplaces have yet to fully adapt to a workforce who are all, at the same time, caregivers. Companies must recognise that we do not — and cannot — have the traditional workforce, where the typical worker is a work-obsessed man supported by his full-time, homemaker wife.

Notably, caregiving today also includes caring for aged parents. The 1960s Baby Boom is morphing into an Elder Boom, and this will hit us hard if our workplaces are not prepared.

Although flexiwork schemes exist in most companies, often they are not working. Companies need to ask themselves honestly: How many people are taking advantage of those policies? And how many who have worked flexibly have advanced to the top?

Some managers refuse to let employees work flexibly, prioritising presence over performance. Even when flexiwork is accessible, employees eschew it, fearing the associated stigma of being out of office.

One novel and exciting initiative to erase this stigma is Telstra’s All Roles Flex movement. Its premise is that all roles are flexible, unless a manager can justify otherwise. Flexibility can mean part-time work, different working hours or working from different locations.

Telstra’s All Role Flex policy showed encouraging results. Company-wide female representation had increased, and 30 per cent of new applicants stated that they applied because of the new flexibility. Now, the company sees flexibility as the norm instead of a rarely broached alternative, helping all workers to balance the tensions between care and career. The model has since been adopted by PricewaterhouseCoopers, ANZ Banks and the Australian Securities Exchange.

Many people have children because it can be a deeply rewarding experience. But we need to ensure that everyone — women and men both — has the genuine choice to take this up, without losing access to paid employment. Society should accommodate and support caregiving, instead of penalising this choice. Having a rewarding career, along with a personal life that allows for the satisfactions of loving and caring for others, should be available to all of us, not only the privileged few with access to full-time care support. It is up to all of us to make this happen.

Prior to 2014, there were very few easily identifiable laws on harassment in Singapore. In November 2014, The Protection from Harassment Act (POHA) was passed as a landmark legislation, and is now the main body of law protecting people who have become the targets of harassment or stalking, both online and physically.

Under POHA, harassment is described as actions ‘involving threatening, abusive or insulting words, behaviours or communications. Such behaviours may be actionable if a) it is meant to cause you harassment, alarm or distress or b) is likely to cause you these feelings and you heard or saw the offending behaviours or words’.

With the recognition of harassment laws under a formal legislation, there is a renewed focus on workplace harassment.

In view of the broadened reach of the Act, it is important that companies ensure that their anti-harassment policies comply with the new legislation.

After POHA was passed, the Advisory was also issued by a committee comprising government stakeholders, unions, employers and subject matter experts to provide authoritative guidance for employers on addressing workplace harassment.

Although the Tripartite Advisory on Managing Workplace Harassment is not technically law, it may have legal implications as it prescribes what companies and their staff should do to address and prevent workplace harassment. This may affect a company’s duty of care to provide its employees with a safe place of work.

As a facet of POHA 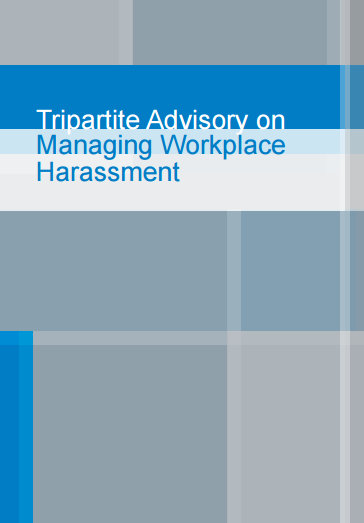 , the Advisory recommends that employers adopt the following practices:

Employers should develop a formal policy which prohibits harassment and also ensures recourse in the case of harassment at the workplace. The policy should be developed in consultation with workers in the organisation/the unions (if any)

It is important to ensure that harassment is taken seriously at all levels of the organisation. Thus employers are encourage to train their employees, especially the HR, line managers and supervisors to handle harassment cases. Employers can also consider establishing a support group or engaging professionals to provide counselling services and support to affected persons.

Employers should develop the following procedures, where practicable, to handle any potential workplace harassment issues:

Employers should ensure that employees are aware of these procedures, and are able to utilise them easily.

Given that workplaces are rapidly becoming more diverse, cultural differences may lead to different conceptions of what is acceptable workplace behaviour. It is thus critical that companies trains their staff on recognizing what constitutes harassment, who to turn to when a problem arises, and the company’s zero-tolerance policy against harassment.

In our experience we have found that clear policies and procedures on workplace harassment is the key to effective resolutions of harassment incidents, and a strong signal that the company cares about the safety of its employees.